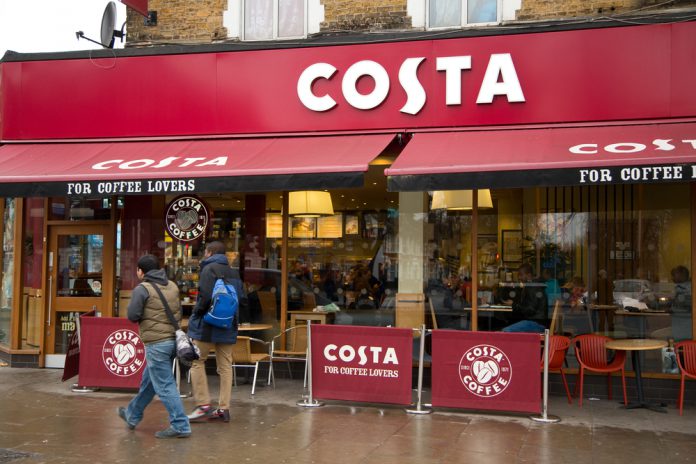 Sales were up 8.3 percent in the third quarter with the company, which operates Costa Coffee and Premier Inn, said that it was on track to meet its full-year expectations.

Like-for-like sales at Costa rose 2.3 percent in the first half of 2016, well below the 4.4 percent growth reported across the same period last year. Nevertheless, Costa noted a strong third quarter finish, with like-for-like sales up by 4.3 percent, as the company continued to benefit from its festive menu offerings and new marketing campaigns.

Allison Brittan, chief executive of Whitbread commented that Costa Coffee’ growth was “supported by its new advertising and promotional campaigns and benefited from the timing of the quarter end, which included a strong start to the Christmas period”.

Whilst growth in its Costa chains remained buoyant, profits were affected by the marked slowdown in the London hotel market. Increased competition from new accommodation platforms such as Airbnb have jeopardised Premier Inn’s traditional customer bases. At its Premier Inn locations, like-for-like sales rose by 1.8 percent with total sales also growing by 9.2 percent in the third quarter of 2016. However, total revenue per room fell by 1 percent. In the capital, revenue per room fell more decidedly by 6.5 percent, damaging profits.

In response to growing costs, in November the brand initiated a five-year “cost-efficiency” plan, totalling around £150 million. The plan was envisaged as a way to offset additional strains to revenue as a result of rising minimum wage rates and business rate change, as currency movements continue to have an impact.

This follows a disappointing set of results for Restaurant Group (LON:RTN) on Wednesday, as the casual dining group continues to feel the affects of rising wage costs and a challenging market.

The company said it was set to meet full-year projections despite challenges for its hotel enterprises. pre-tax profits are expected to total £555 million.

Shares in Whitbread Plc were down 4.8 percent in Thursday morning trading, as of 10.50AM (GMT).