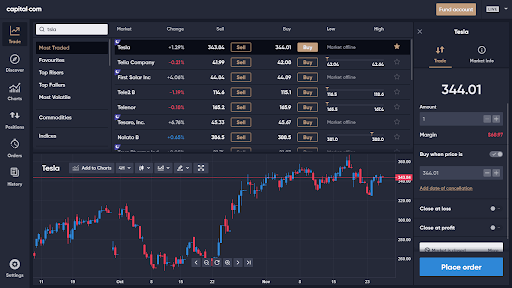 The financial markets might have entered choppy waters, but that has done nothing to curb the enthusiasm of investors.

At least, that’s the case if Capital.com is any kind of yardstick on the matter. The financial derivatives trading platform has just revealed that it saw quite rapid growth over the last quarter in terms of new user acquisition.

According to Capital.com, it had more than 6.4 million accounts at the close of the second quarter, up by more than one million in the last three months. The company added that its growth rate was almost 20% faster than it was in the first quarter of the year.

The increased user signups at Capital.com suggests that people are increasingly seeing the economic downturn as an opportunity to boost their investment portfolios. Indeed, while most markets are trending down, Capital.com was able to sustain its level of trading activity, with volumes just three percent lower in Q2 than they were in the previous quarter. Altogether, the platform saw a cumulative $255 billion in trades.

What is changing is where investors are placing their bets. While crypto was previously one of the most popular assets on Capital.com’s platform, it has suddenly disappeared out of view, nowhere to be seen on its list of five most-traded assets in Q2. Rather, the Q2 list was dominated by indices and commodities, Capital.com said, with investors generally showing a preference for short positions to try and take advantage of the bearish market conditions. It added that investors are likely steering clear of crypto due to its notorious volatility, which is in direct contrast to the “risk-off approach” that most investors are taking nowadays.

The disappearance of crypto from the top-traded asset list may also be linked to Capital.com’s strong growth in the U.K., where crypto derivatives are not available. The company said trading activity from U.K.-based users jumped by 18% in the quarter compared to three months prior. That helped its European client base to increase their share of the platform’s overall trading volume to more than 31%.

In a statement, Capital.com’s Group CEO Peter Hetherington said the company’s growth rate in the U.K. and Europe can be explained by its ongoing effort to expand its global footprint in step with the highest regulatory standards.

“As markets turn choppy, the self-directed investor will be seeking assistance and greater support through education and risk management tools,” he pointed out. “We will continue to prioritize best-in-class insights, information and analytics to help clients adapt and hone their trading strategies as markets turn more bearish.”